skip to main | skip to sidebar

Did I really need a steak sandwich, french fries, creme brulee cheesecake and a MIMOSA for lunch on a weekday???

Some musings, comments, rants and good stuff:
1. Pompous judgmental assholes can sometimes say the right thing.
Attorney for Anna Nicole Smith’s ex husband admitted on live television that he believes that that old man did, in fact, love her and wanted her provided for.
He should have stopped talking there. Turned back into pompous, judgmental asshole in the very next sentence.
2. Steak sandwich, french fries, crème brulee cheesecake and a mimosa are NOT a good idea for a mid-week lunch …
I still have a belly ache! *Insert bad influence friend's name here" - could you not have stopped me? Or at least not encouraged the mimosa… while you ate your healthy soup for lunch??? I put part blame on you for the bellyache – may everything you eat this weekend add an extra inch to your hips – HA so there. =) =) =)
3. Skytrain commute not so bad.
Have had to change my commute because of mess on Cambie and it is to damn cold to walk across the bridge and still look good in my Lululemon coat.
So some days are not a total waste of makeup. I must look human today. Was asked out on the skytrain via business card!
4. You cannot mind melt someone’s head into exploding.
Tried it this morning on the bus ride to skytrain.
Pushy woman, bad breath, cellphone talking, giggling mess of a perfume hag. Touching me, invading personal space. Ugh. No matter how hard I squinted my eyes, or wiggled my nose, her head would just not pop off.
Note to woman on bus. Forget the perfume, try MOUTHWASH!
5. I am actually normal.
When compared to the female diaper wearing astronaut.
Story: http://www.msnbc.msn.com/id/17034568/site/newsweek/ 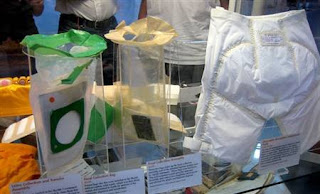 Hey, for your information, I would have traded that yucky seafood chowder swill for your steak sandwich tummy ache in a heartbeat. Only, I had already eaten by the time you dragged me to the pub. Now, the Mimosa...come on, it was purrrfect, admit it. Hope your tummy is better soon.

I am a mother of an eighteen year old genius named Megan. I am a daughter, step-daugther, sister, step-sister and best friend. I am sometimes a lover. I am a single lesbian, trying to muddle my way through life in Vancouver, British Columbia.

I love to read anything I can get my hands on, I like to write but do not consider myself a writer. I love and am loved. I have worries, concerns, dreams and desires. I visit the ocean every day.

This blog contains some of my story.

I hope you enjoy your visit to nerdgirlsspace.

Past Posts (the good old days?)

check out these rings - there is about five I want!